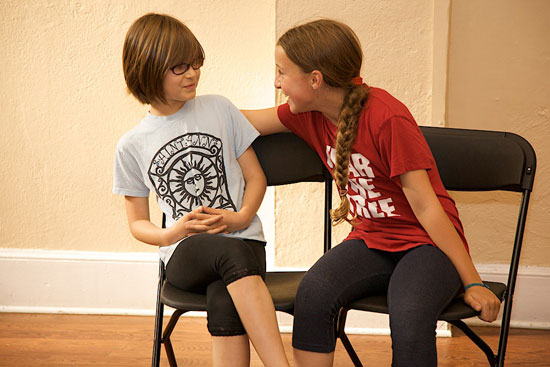 A year of study at the Young Actors Workshop, meeting once a week for 33 sessions, incorporates theater games, improvisation, and work on scenes, monologues and plays. Each of these areas strengthens the young actor in particular ways.

Why? A game, with goals and consequences, and challenges that reward sensible risk-taking, has much in common with theater.

*“Kittie in the Corner” (a version of running bases) encourages collaboration with others on taking a chance, promotes communication and rewards those who throw themselves into it.

*”Museum” is essentially the same as doing a play. There is a setting and a suspenseful story: which sculpture (played by an actor, of course) will not get caught changing his pose and thus become the next night watchman/janitor? It demands that students find stillness and yet are able to move quickly and decisively.

*”Giants, Wizards, Elves” (a vigorous, physically expressive version of Rock, Paper, Scissors) promotes collaboration and ingenuity. Divided into two teams, the actors must agree on whether they will be giants, wizards or elves. They can try to trick the opposing team into thinking they’re other than what they’ve agreed upon. They must stay calm when the showdown comes (much like the showdown at the OK Corral), and then respond quickly to capture or evade capture by their opponents.

All of these games build a sense of ensemble, without which theater is impossible.

Why? Improvisation is a great way to teach a student about the actor’s work. Because they’re not required to prepare or work from a script, actors can get onstage right away and focus on the immediate moment. Improvs mirror the unpredictability of life.  And, because the actor doesn’t have to concentrate on remembering written lines, they’re able to access other skills without which good acting cannot happen: listening, creating environment, focusing on the senses, focusing on communication and getting what they want.

I like improvisations that give the actor great freedom within specific structure:

*In “Airport Store” (a variation on gibberish), an actor plays a tourist who has to  buy three things at the store before his plane takes off. But there’s an obstacle: the actor speaks his own made-up language and don’t understand English. How are he and the shop owner going to communicate without a shared language?

*“One Word at a Time” asks two actors to create a scene about anything they like. However, each line the actor speaks can only be one word, so they must choose a specific, dramatic word to move the scene forward.

*In “Taxicab,” the actor must embody an adjective (such as Lonely, Happy, Paranoid, Jealous), hail a taxicab and get the driver to take her to her destination. During her journey, everything she does must be influenced by the adjective she’s selected. The actor playing the taxi cab driver must deal with this eccentric passenger.

*“You’re Fired” introduces the concept of playing actions. It teaches the actor that a person only does something for the sake of getting something she wants.

As the improvisations develop and mature, the actor finds that the keys to successful, spontaneous life onstage involve a balance of collaboration and individualism. An actor may have created a character that is marvelous on its own, but if there is not enough collaboration with others, the scene will not progress.

Finally, students learn that onstage drama comes from the following: accepting what your partner gives you and giving it back to them with value added and deeper nuance until you find yourself onstage dealing with one another, pursuing goals and building a story.

“Suit the action to the word, the word to the action...” - Hamlet

Actors must find a way to speak the words of a playwright and make them their own. Thus, all classes, regardless of age, include a component of monologue and scene work.

A monologue (a character’s speech from a play) enables the student to work on a solo piece they can take home with them. They must identify what makes the piece dramatic, find a way go from one thought to another in a manner that makes sense, and learn to be onstage alone, trusting that if they commit to solving the character’s challenges and problems they will be compelling to watch.

A scene from a full length play (You’re A Good Man Charlie Brown, The Children’s Hour, Antigone, This Is Our Youth, Our Town, Proof) allows the student to explore what they must do to bring the author’s words to life while working with a partner. Relieved of the improviser’s responsibility to make up their own dialogue, they must reverse the process, asking the fundamental question: how must I behave to make it believable for me to speak the words the author has written? 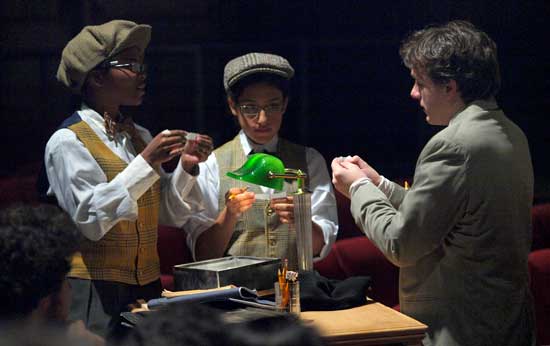 Why? Because everyone wants to do a play. “Let’s put on a play” are magic words! We rehearse plays (or selections from a play) in the second half of the year-long course of study. Here are some ways I choose material:

*We listen to a story, usually a folk tale, and turn it into a play through improvisation and exploration. This challenges the actors to find a balance between doing what is necessary to tell the story and creating embellishments that make the story unique to these actors.

*Authors such as Charles Ludlam, David Ives, William Inge and Thornton Wilder have created marvelous short plays that can be done by young actors.

*The Bard: William Shakespeare’s A Midsummer Night’s Dream is full of wonderful roles and can be done—in abbreviated form--by young actors.

“Is this a test?”
“You bet.” - Ezra Barnes (responding to an actor in an audition)

Gaining admission to Performing Arts High Schools, colleges and conservatories, or auditioning for an agent, is highly competitive. However, there are ways to make the process enjoyable, positive and constructive for your children. For many years I’ve coached students in these auditions. Several were accepted at the school of their choice. Others went deep into the audition process, with callbacks and interviews following. Almost all found the process much more enjoyable and rewarding because of the work we’d done.

Essential to the process is selecting audition monologues that fit the actor’s personality. Over the years I’ve collected a large selection of age appropriate pieces written by fine playwrights. Another ingredient in the process is helping the actor remain spontaneous while being well prepared. The actors I coach understand that the vitality of the moment is integral to a successful performance. Ultimately, my goal is to help the actor connect to the piece so strongly that what emerges is a pure expression of the actor’s own personality through the words of the author.

The class will also include mock interviews, cold readings and improvisation prep.

What Makes a Class for Older Kids Different from one for Younger Kids?

I’m often asked “Do you teach the same thing to actors of different ages?” Yes, I answer.
“How can something for an 8 year old be of value to a 16 year old?”, I’m asked. The answer lies in the child. As they mature, their sense of what to do in an improv or with a scene becomes more and more nuanced.

The study of theater and acting is a great way to help children access their emotional landscape, learn empathy for others and broaden their view of the world. As they mature, their ideas become more nuanced, and they acquire new tools to express them onstage. As with all artistic disciplines one must always keep the basics in mind and return to them. But the difference between an improvised scene done by ten year old students and one done by teenagers are as different as those children are to each other.

When a child has completed a year’s study with the Young Actors Workshop they are ready to take their work to a deeper level and progress to more sophisticated scenes, monologues and improvisatory theater. Our curriculum and the personal attention we give allows for students to return year after year.

Would your child like to try out a class to see if it’s for them? For a $35 fee, they can audit a session, and will participate fully in the class. I don’t encourage parents to audit, as the kids become more self conscious. However, parents may audit if they participate as fully as the kids. 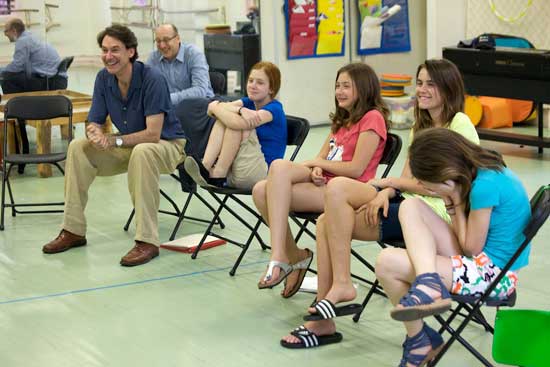